Major changes in the diets of Finnish children are needed if global sustainability goals are to be met, a study by the University of Helsinki and Folkhälsan Research Center shows. To meet the standards of the Planetary Health Diet, higher consumption of whole grains and legumes and lower consumption of red meat and dairy products are recommended.

Driven by current global trends, our food system generates adverse side effects on both human health and the environment. Diet plays a central role in obesity and life-style diseases in some places, while undernutrition still remains a significant reason for unnecessary death and suffering in others. Illustratively, food scarcity has left nearly 690 million people undernourished while some 650 million people suffer from obesity globally.

Along the same lines, the global food production is one of the main causes of environmental degradation. Approximately 25 % of the global greenhouse gas emissions derive from the food system and 60 % of this comes from agriculture. Furthermore, a significant portion of the land is used for grazing and cultivation, which diminishes the biodiversity of these ecosystems.

These challenges coincide, as the global population and nutritional requirements continue to grow while our planetary boundaries are becoming ever more evident. Without decisive action, our children will inherit a planet where many suffer unnecessarily from environmental collapse, and preventable ill health.

The Planetary Health Diet was developed by the EAT-Lancet commission as a tool to feed a world population of 10 billion people by 2050 in an environmentally sustainable way. Thus, the diet balances environmental sustainability with nutritional guidelines.

– The planetary diet favours the use of plant foods such as whole grains, vegetables, legumes and nuts but also includes some animal-source foods. The aim is to curb the consumption of dairy products and meat to achieve a more ecological diet, says university lecturer Liisa Korkalo, University of Helsinki. 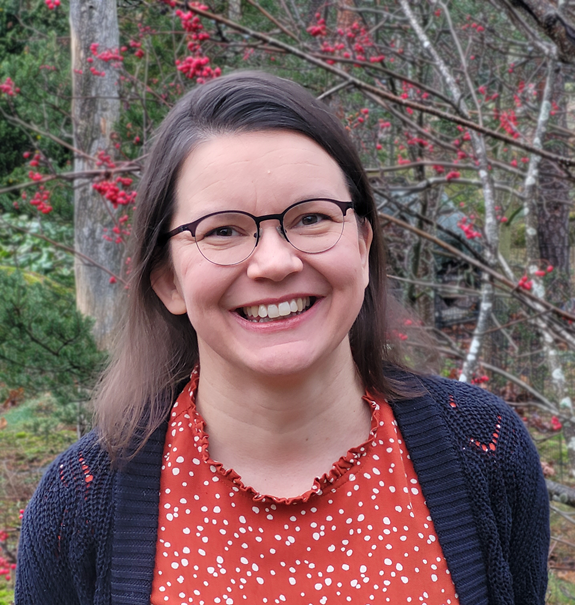 – However, there is no need to give up any food altogether. It is a matter of taking steps towards the greater importance of vegetarian alternatives, Korkalo continues.

Even as the Planetary Health Diet is built on environmental sustainability principles while accounting for health considerations, it has been criticised for not recognising economic and social factors, as well as the local availability of food products. This may be a major problem, since models have shown that the diet would be unaffordable for almost a quarter of the world’s population. One study has also found that calcium and iron intake could be a concern in adopting this diet among children. As such, further research into the dietary adequacy of a diet in different groups, such as children, is quite warranted, as well as further study into realistic and locally implementable solutions.

The results show that the mean daily consumption of red meat and dairy products clearly exceeds the target, around fivefold. The most striking finding was the extremely low consumption of legumes among Finnish children, and this could be one of the main targets in future policies and programmes. The consumption of nuts was also very low. Whole grains accounted for only a third of the target, while potato consumption was double the target amount. Fish and poultry where on target, and some of the children met the target for eggs. Some two-thirds of the children achieved the target amount of fruits, while the vegetable target was achieved only by 5%. Palm oil consumption should be as low as possible and was roughly on target. On the other hand, the use of vegetable oils high in unsaturated fats is recommendable and there is room to increase their consumption. Over 90% of the children consumed more added sugars than the target. It is, however, worth noting that the Planetary Health Diet’s target for added sugar is stricter than the current Finnish recommendation. 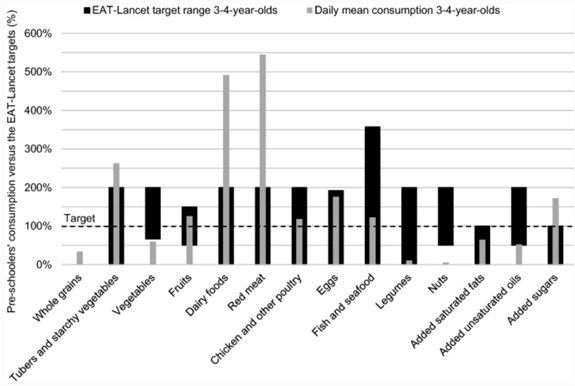 Fig 1. Diet gap between the daily mean consumption of 3- to 4-year-old Finnish pre-schoolers (n = 460, mean energy intake 1311 kcal/day) in the cross-sectional DAGIS study and the EAT-Lancet reference diet. The EAT-Lancet target level is indicated by the dashed line at 100%, and the thicker shaded bars represent the EAT-Lancet target ranges. 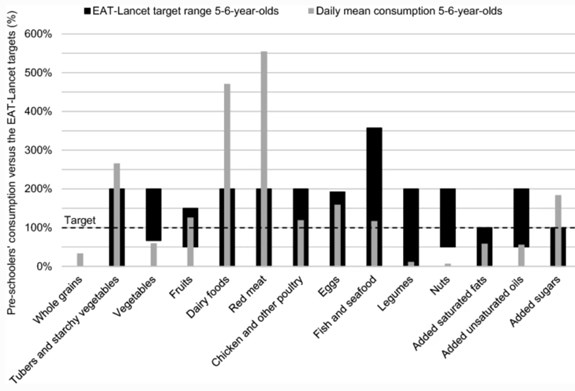 Fig 2. Diet gap between the daily mean consumption of 5- to 6-year-old Finnish pre-schoolers (n = 402, mean energy intake 1449 kcal/day) in the cross-sectional DAGIS study and the EAT-Lancet reference diet. The EAT-Lancet target level is indicated by the dashed line at 100%, and the thicker shaded bars represent the EAT-Lancet target ranges.

– It seems we still have a long way to go before the wider use of different legumes becomes common among Finnish families, since many are quite unused to cooking with them, especially different beans and lentils. Of course, whole grains usage is an issue as well, but the cultural barriers are much lower, as many whole grain products, such as rye bread, are already an integral part of the Finnish diet, comments Korkalo.

Transforming the diet of Finnish children in accordance with the Planetary Health Diet would require significant changes in our dietary habits. The Finnish children would need to eat more plant-based foods, especially protein sources like legumes and nut. Animal protein consumption, especially dairy products and red meat would need to be decreased drastically. Also, whole grains should replace refined grain products when possible.

– I think that the examples that adults set are important for a child to learn to appreciate beans, lentils, and peas as a good-tasting part of their diet. I would encourage bold introduction of legumes, both at home and on the menus of kindergartens and schools, says Korkalo.

The dietary change should span the entire food system. In addition, a version of the planetary diet that accounts for Finnish conditions should be adapted.

– Further research is also needed into how children's nutrient intake would change if they moved towards a planetary diet, Korkalo concludes.